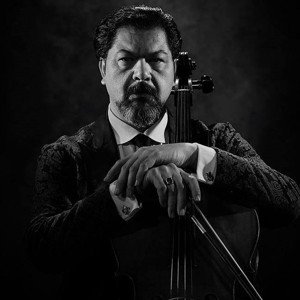 Global peace ambassador and visionary Karim K. Wasfi was born in Cairo, Egypt, to a Syrian-Egyptian Iraqi family. A renowned cellist and conductor, Karim Wasfi is president and founder of the Peace Through Arts Global Foundation, and a fellow of the Geneva Centre for Security Policy. With over two decades of experience in cultural diplomacy, he uses music, sound and art therapy for healing and intercultural integration, de-radicalization, tension prevention and the fight against terrorism. His innovative approach has helped thousands of people in crisis areas to emerge from violence, fear and the intimidation of terror. His work and initiatives have received wide coverage by national and international media, including the BBC, CNN, the New York Times and Forbes, and his videos on YouTube, playing music following the explosions in Iraq, have gone viral, with over 33 million viewers. Karim Wasfi was named Humanitarian of the Year 2015 by the global business community in Arabia, and received the 2016 Asia Game Changers Award from the Asian Society and the Rockefeller Foundation. He holds a B.A. in physics and philosophy from Cairo University and an M.A. in music technology and management from the Jacobs School of Music at Indiana University. Karim Wasfi is one of the orchestral musicians from around the world who joins the New York Philharmonic in Mahler's Symphony No. 7.